And now, Google Translate works in any app, if only you can Get it on Google Play for free. Allowing you to speak with the world. As well as connect with people, places, and culture across language barriers. Speak, snap, write or type, it’s your choice! It’s a great tool for you to talk with someone who speaks a different language.

But, not so many know exactly how this Multilingual Web Interpreter works. So, in this article, I am going to elaborate a little bit on how it works. And more so, how you can use it right. Now that you can use it to download various languages to your device too. So that you can translate offline as well. 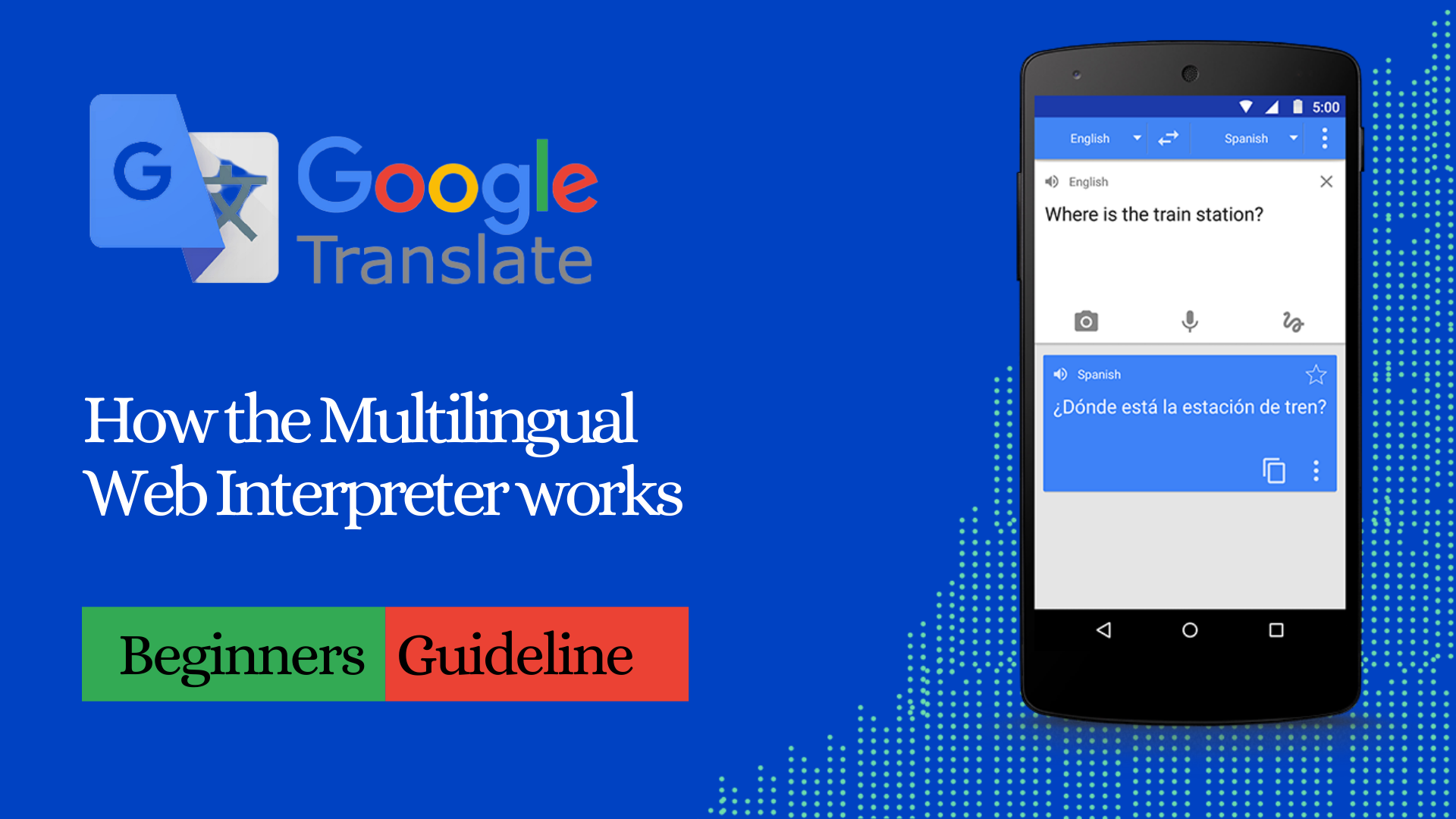 In other words, this is a really handy feature as it helps you translate languages even when you don’t have an Internet connection. So, what is Google Translate and how does it work?

What is Google Translate?

Google Translate is a multilingual neural machine translation service developed by Google, to translate text, documents, and websites from one language into another. It offers a website interface, a mobile app for Android and iOS, and an application programming interface that helps developers build browser extensions and software applications.

It’s main aim is to translate whole phrases rather than single words. And then gather overlapping phrases for translation. Moreover, it also analyzes bilingual text corpora to generate a statistical model that translates texts from one language to another. Perse, this is where Google Translate comes in.

Related Topic: Natural Language Processing | What it is & why it matters

In reality, it’s an extremely useful tool to translate words and sentences from one language to another. While supporting a number of languages from around the world. Not to mention, you can use this translation service on your iPhone, iPad, Android, and other devices.

As of April 2021, Google Translate supports 109 languages at various levels. And as of April 2016, it claimed over 500 million total users, with more than 100 billion words translated daily. You can read and learn more in detail as explained by Wikipedia.

Originally centered around statistical machine translation, Google Translate worked by translating the required text first into English. As an intermediary step language and then into the target language. While cross-referencing the phrase in question with millions of documents taken from official United Nations and European Parliament transcripts.

Contrary to popular misconception, Google chose not to hire experts to compile exhaustive grammars for each mother tongue. Why? Due to the ever-evolving nature of language. Any attempt to do so would quickly be left obsolete. Unfortunately, the original translations were inevitably imperfect.

However, they served to reveal the broad intent of the original passage. Even if Google Translate could not deliver the faultless, fluid translation expected from a human expert. But, in November 2016, Google announced the transition to a neural machine translation premise.

A “deep learning” practice that saw the service comparing whole sentences at a time from a broader range of linguistic sources. And as a result, this ensured greater accuracy. By giving the full context rather than just sentence clauses in isolation. In nutshell, Google offers two options to help you translate your content.

By comparing Japanese-to-English translations with Korean-to-English, the service is able to deduce and map out the relationship between Japanese and Korean. While making translations back and forth between those two languages accordingly.

It’s a great leap forward in computers’ understanding of semantics. A process still confounded by metaphorical expressions and quirky idioms. On the other hand, processing these calculations over and over again allows Google to spot recurring patterns between words in different languages.

Meaning its chance of achieving accuracy is constantly improving. The result the use finally receives is lastly refined to bring the passage closer to actual speech.

The Key Features of Google Translate to Know

One of the many key features of Google Translate are its use as a Dictionary. Meaning, if you have Google Translate on your device, you don’t need a dictionary. It’s because this app can bring you word definitions on the same translation interface. It’s a less-known yet extremely useful feature of this app.

In the same way, you can also use it to block offensive words. Thus, if you want to keep offensive words from your translations, you can do so by turning off an option in the Google Translate app on your devices. All you’ll need to do is launch the App and tap on the Hamburger icon.

Related Topic: Why are WordPress Post Revisions important? How it works

Google Translate can be easily integrated into browsers like Chrome (where it has existed as a standard function since February 2010). And by the same token, it can pronounce highlighted text in many cases. And can even spot words within pictures using Optical Character Recognition (OCR) and automatically identify unfamiliar languages.

If you’ve used the app, it’s likely you’ve only used it for voice translations. It can actually do much more than that and you need to learn some of these tips on how to use Google Translate effectively. Its offline translation feature helps the app to function even in countries where it’s blocked for some reason.

1. How to Use the Offline Translation feature:

2. How to Start the Conversation Mode feature:

As a result, you and your partner can both start talking right away. Whereby, you’ll see the real-time translations on your screen. Not forgetting, you can even turn the translations into manual mode too. How? By tapping on the mic icon at the left and right corners of your screen.

Likewise, another really useful Google Translate tip is to use the visual translations feature. Whereas you can point your camera at something and then the Google Translate app will translate text in that image for you in real-time. This doesn’t require you to type the foreign characters in the app.

3. How to Use the Google Translate Images feature:

Additionally, you can also use Google Translate to save your favorite words and phrases too. So that you can get access to them quickly at a later time. This way you can build up your own little dictionary. Not only that but one that gives translations for your chosen words and phrases.

By the same token, if the person you want to show the Google Translate translation has vision problems, you can get your Google translations to appear full-screen on your device. This way the text will appear in a significantly larger size and most people will be able to read it.

5. How to Make your Translations Go Full-Screen

Equally important, you don’t necessarily need to type text to translate it. Since you can use Google Translate to write words (handwriting) to translate your words and sentences to your chosen language. But, this can only come in handy when someone’s more used to handwriting than text-typing.

6. How to Write to Google Translate

Eventually, Google Translate keeps the history of your translations and you can view it whenever you want in the app. If you don’t want someone accessing this history, you can clear it on your phone. That said, below are the simple steps to Delete Translation History from your device.

7. How to Delete Translation History from your Device:

That’s all you needed to know!

The company has offered an Android app since January 2010 and an iOS version since February 2011. It remains the first port of call for many looking for help with foreign language copy online. So, with that in mind, I hope that you’ve learned something new about how to use Google Translate effectively.

The only thing better than having an excellent website is making it available in multiple languages. That way, more people will be able to enjoy your content, and you may even increase conversions. And that’s where WordPress Translation Plugins come in.

Although English remains the most common written language online, you can reach millions of international internet users by translating your content into other languages. For instance, as a webmaster, WordPress translation plugins are a very cost-effective way of publishing content in multiple languages.

Not to mention, there’re many great free and premium translation solutions readily available. A good alternative to Google Translate is Google Website Translator Plugin. This WordPress plugin also uses Google Translate for translations, so you can translate content into 100+ languages.

There are a few different inline and tabbed designs of the widget and you can also choose to display country flags next to the languages. The general settings page lets you define your website’s default language. Whether you want to allow content to be translated into all languages or only some of them.

It can translate everything in your pages, including content, menu items, widget titles, and theme and plugin strings. Then again, every page on your website can be translated using the language widget. And in that case,  it can be easily added to your website design using a widget, shortcode, or PHP code.

A lot of comparisons can be drawn between GTranslate and Google Website Translator, as they both allow automatic translations on your website by using Google Translate. I recommend testing both to see which one you prefer. You see more info on how to download the translation plugin or integrate the plugin.

Finally, if you’ll have any other additional tips or contributions, you can let us know in our comments below. You can also Contact Us for more support or help.

You enjoyed reading this Blog Post, right? Well, Subscribe to our Free Newsletters Daily and never miss a thing from us:
previousFree Online Web Tools | A Toolkit For Beginner Webmasters
nextRansomware Attack | How Do You Prevent Cyber Threats?