Dr. William Ruto was born William Kipchirchir Samoei Arap Ruto on 21 December 1966. In fact, he is a well known  Kenyan politician, and currently, he is the Deputy President of Kenya since 2013.

On one hand, William Ruto served as the Acting President of Kenya between 5 and 8 October 2014 when President Uhuru Kenyatta was at the Hague. Not forgetting, he previously served in various ministerial positions, including the:

On the other hand, William Ruto was Secretary-General of KANU, the former ruling political party, and the MP for Eldoret North Constituency between December 1997 and January 2013.

He won the seat in the 1997 Kenyan election after defeating Reuben Chesire. Whereby, he was appointed to the position of Assistant Minister in the Office of the President by President Daniel Arap Moi in 1998.

Then again, thereafter, he was promoted to become the Minister for Home Affairs in August 2002. 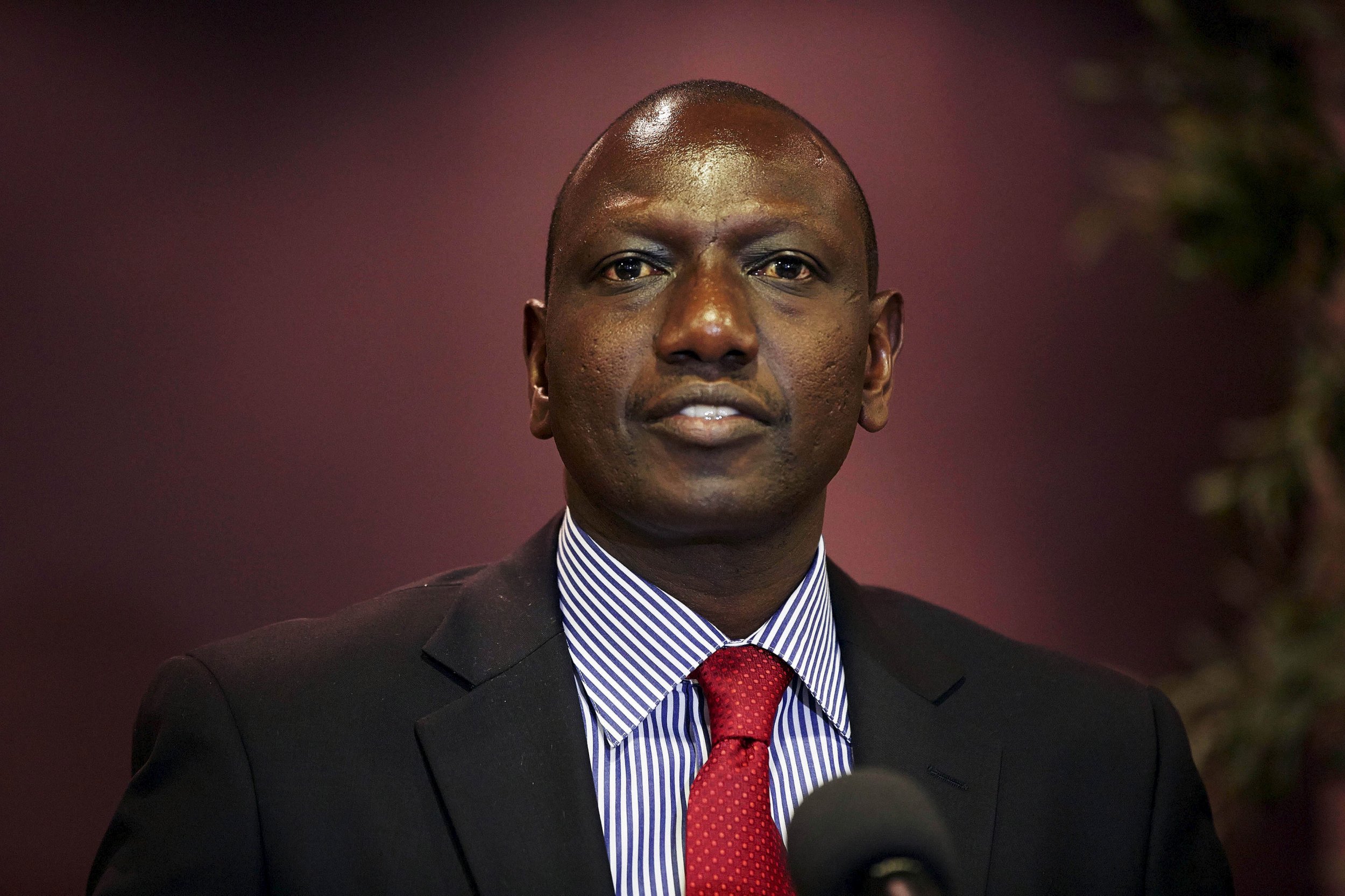 Ruto also previously served as the Chairman of the Parliamentary Select Committee on Constitutional Reform in the 9th Parliament.

Where was William Ruto Born?

In the first place, William Ruto was born to Daniel Cheruiyot and Sarah Cheruiyot on 21st December 1966, in the Kamagut region of the Kenyan county Uasin Gishu.

Secondly, Ruto received his elementary education from a primary school at Kamagut, and then entered the ‘Wareng Secondary School’ located in Eldoret.

Later on, he joined the ‘University of Nairobi’, where he enrolled for a bachelor’s degree. Whereas, William specialized in subjects such as Zoology and Botany, as a part of this course.

Above all, Ruto graduated in 1990 and topped his class for which he was offered a scholarship to pursue his master’s degree at the same university.

In 1991, he enrolled for an MSc at the university, but a year later, he postponed the course for other engagements.

Did William Ruto use to Sell Chickens?

Important to realize, a scion of retired president Daniel Arap Moi, William Ruto, is a self-made politician born into poverty.

Not to mention, who sold peanuts on the Eldoret highway to supplement the family income.

Ruto braved the scorching sun to sell chicken to motorists at the railway crossing point by then as a student. That was years before he got his big break.

And also, dabbled with politics when he got involved with the Cyrus Jirongo-led Youth for Kenyan African National Union ‘92.

But the future of Kambi Kuku now looks bleak following the re-carpeting of the road, a major artery linking Kenya and Uganda.

For example, the Sh7.4 billion Road construction project that started two years ago has led to the elimination of speed bumps that existed on the highway.

Where did William Ruto go for School?

William Samoei Ruto, Ph.D. is the first holder of the Deputy President’s office, Republic of Kenya.

Dr. Ruto graduated with a doctorate degree in Plant Ecology from the University of Nairobi on 21 December 2018. He also holds a Masters degree in the same discipline from the same institution.

He began course work for his MSc in 1991 but deferred his research in 1992. Particularly, after he was employed by the Kenya African National Union, in its successful presidential re-election campaign.

Dr. Ruto holds a Bachelor of Science (B.Sc) degree in Botany and Zoology from the University of Nairobi.

He did his A-Levels at Kapsabet High School in Nandi County after completing his O-Levels at Wareng’ Secondary School in Eldoret, Uasin Gishu County.

During university holidays, Dr. Ruto taught in Sergoit and Kamagut secondary schools in Uasin Gishu County as an untrained teacher. At the university, he was a leader of the students’ Christian Union.

The Deputy President joined mainstream politics in 1997 when he was elected Member of Parliament for Eldoret North constituency on a KANU ticket.

Before then, he had successfully contested various party branch positions.

He established himself as an astute politician and rose within the party ranks, becoming its secretary-general in 2005.

He was appointed Home Affairs Assistant Minister in 2002 and re-elected as MP in the General Election later the same year.

Dr. Ruto was a key campaigner of President Uhuru Kenyatta’s first presidential bid in that election.

However, Mr. Kenyatta lost to Mwai Kibaki of the National Rainbow Coalition, NARC. Dr. Ruto stood by Mr. Kenyatta’s side as he conceded defeat and congratulated the President-elect, becoming the first presidential contender to do so.

He also served as the Chairman of the Parliamentary Select Committee on Constitutional Reform in the 9th Parliament and led the process of assembling the team and setting up the structures that put Kenya on the road to a new constitution.

When did Ruto run For President?

In January 2006, Dr. Ruto declared he would join the 2007 presidential race. However, he lost in the party’s nominations.

But, he was, however, appointed as the Minister for Agriculture in the Coalition Government that was formed.

He served for three years. And as a matter of fact, he revived irrigation schemes and provided affordable fertilizer to farmers.

In addition, ensuring that the maize, sugarcane, coffee, and tea sectors had a bumper harvest. As well as a ready market.

Later on, he got a transfer to the Ministry of Higher Education. Whereas, he set up structures to reform the university education system.

How was the Jubilee Alliance Formed?

Dr. Ruto declared his candidature for the presidency in the 2013 General Election.

However, he shelved his ambition and joined hands with Mr. Kenyatta to form the Jubilee Alliance. All in all, which brought together the two major political parties. Namely:

He was Mr. Kenyatta’s running mate on a Jubilee ticket. After all, Mr. Kenyatta and Dr. Ruto emerged winners (sworn in office on 9 April 2013). In that case, for a term of five years.

In 2017, Dr. Ruto was, again, the running mate of President Uhuru Kenyatta. On a Jubilee Party ticket after their constituent parties (TNA and URP) merged to become one party.

How Much is William Ruto Worth?

Ruto is a man whose wealth could be in the region of a hundred million-plus.

Quite a Herculean feat for someone who started life with nothing. But, burning ambition to succeed ‘no matter what at whatever the cost’.

According to 2018 reports released by various ranking institutes, Ruto swings among the richest people in Kenya.

With a net worth approximation very close to Sh. 40 billion.

Of course, ‘Hustler‘ as he always presents himself to the mwananchi has a long list of property and other income-generating entities.

Especially, that earns him the status and class he now comfortably swings in. But, what are some known property and businesses that ‘Hustler’ owns?

How did William Ruto become so Wealthy?

For Vice President William Samoei Ruto, the big break in the world of big money and mega deals must have come on Wednesday, December 3, 1997.

This particular Wednesday must hold special significance to Ruto. For one thing, it is the day he accomplished the hitherto impossible feat.

In particular, of getting himself allocated close to a dozen prime plots in Nairobi; all part of a single day’s work.

These plots were to become the financial launching pad for the ambitious but humbly-bred young man from Eldoret.

It was these plots that he used a few days later to get millions of shillings from City Finance Bank Company and Ajay Shah’s collapsed trust Bank.

Using some of these plots as collateral, Ruto got some Kshs 50 million from City Finance bank on July 2nd, 1998.

A Breakdown of Ruto’s Wealth and Riches

For sure, as of today, the Story of Ruto is an undeniably classical rag to riches.

Although he may not be wealthy in the leagues of competitors such as Raila Odinga, Mwai Kibaki or Musalia Mudavadi he is certainly not a poor man.

Even when compared with the other lot of presidential candidates such as Kalonzo Musyoka, Najib Balala, and Dr. Julia Ojiambo.

Who is the Wife of William Ruto?

Firstly, Dr. Ruto is married to Rachel Chebet. And together, they have six children. Including an adopted daughter called Nadia.

Humble elegant William Ruto wife Rachel Ruto is one woman who has a passion to push for Women Empowerment.

For one thing, she brings a different aspect of seeing women with a bright future and that’s why she aims to create great opportunities for women.

Referred to as Rael by her friends, Rachel Ruto actually studied Education. However, she gave up teaching so that she could get married.

What are the Contacts of William Ruto?

For your information, you can contact Dr. William Ruto using the following details.

In that case, to ask him more questions and even pour in your previews and even thoughts you’ll require from his office.

I hope you have gathered enough information in regard to Kenya’s VP Dr. Ruto.

But, if you have additional information, contributions, or even suggestions, please don’t hesitate to Contact Us.

You can also share some or more of your thoughts in the comments box below this post.

Below are more additional and related to the topic links.

NB: All bloggers can now join our Guests Posting Program for free. While marketers can Email Us Directly so as to Advertise their key Brand/Business/Products on our Blog Site Page from $150 for Web Videos, $70 for Banner Ads, $60 for Permanent Posts, $30 for Dofollow Links, and much more... But, all in all — whatever the reason — you can Contact Us for more help. Whew! If you've enjoyed our Weblog Content, you can Subscribe to our Daily Newsletters by mail — never miss a thing!
previousShort-Tail Keywords | 10 Benefits & Best SEO Audit Tools
nextWhat Are Medicinal Herbs? 10 Plants For Kitchen Gardens
Below are some Topmost Digital Services as well as Online Solution Gigs that all Web Business Masters will find resourceful