Why Cortana is Being Discontinued on Mobile by Microsoft

Unfortunately, as of April this year, Microsoft has since silenced Cortana — its Digital Assistant On iOS And Android. So, officially Microsoft discontinued its Cortana mobile app, which no longer works on neither iOS nor Android. Thus, if you have no idea, now you know. But, let us know the reasons.

From April, the Cortana mobile app — which was first removed from the App Store and Google Play in November — is no longer supported. It’s as dead as dodo! This means that lists and reminders will no longer be available through Cortana apps on both iOS and Android mobile devices. 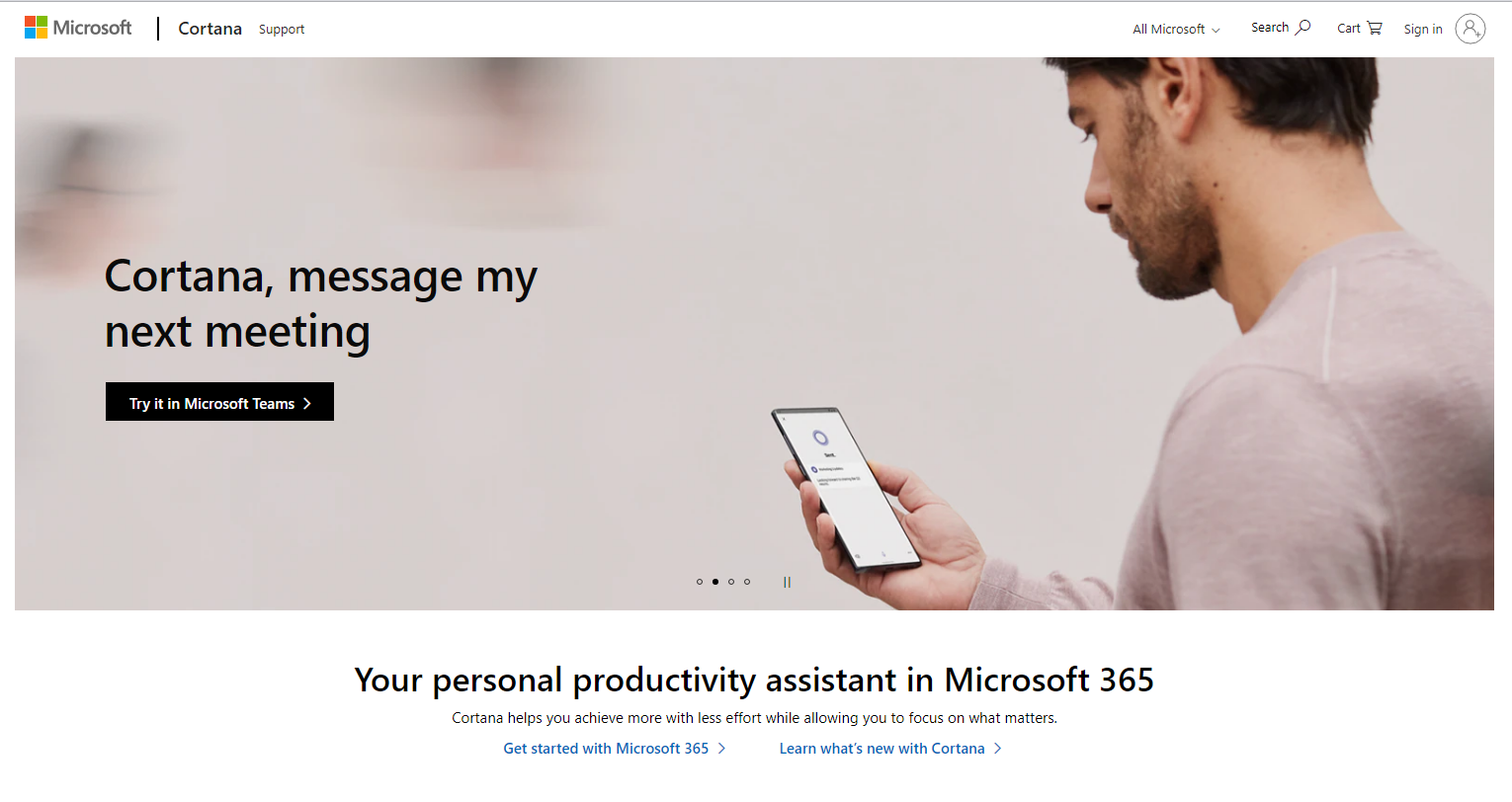 However, Microsoft states that Cortana can still be accessed on Windows 10 and Microsoft’s To-Do apps. More so, some of which are still available on both Android and iOS devices. So, what is this Microsoft Digital Assistant, and how does it work? Let’s also learn why it’s being discontinued on iOS and Android.

Cortana is Microsoft’s personal productivity and digital assistant tool that helps you save time and focus attention on what matters most. To get started with Cortana on Windows, all you’ll need to do is select the Cortana icon on the taskbar. If you’re not sure what to say, try asking, “What can you do?”

In reality, Cortana — AI-based — is one of the standout features of Windows 10 and it is no stranger to Android. The Android version of the personal assistant first leaked online sometime back in July 2015. And ever since Microsoft went on to invite the public to help it fine-tune the application before eventual rollout.

One of the features that were instantly made available to those testers is the ability to wake the personal assistant AI by simply calling out ‘Hey Cortana’. The ‘Hey Cortana’ feature is not new to mobile. It has been available to users of Windows Phone already and it now works on desktop machines pretty well.

However, on Android, the home of Google’s ‘Hey Google’ feature that is tied to the Mountain View-based company’s cash cow, Search, ‘Hey Cortana’ had not been any show. Although it’s being discontinued, it’s still useful on Windows.

Things that Cortana can do for you include:

It’s important to realize, Cortana is only being discontinued on iOS and Android. Whilst, for Windows 10, Microsoft has promised that Cortana will still receive new features now and then. And that it will get better with regular updates via the Microsoft Store.

How to Access the Key Cortana Features on a PC

As can be seen, (Pocket-lint) – Windows 10 features Microsoft’s very own virtual assistant, Cortana. Just like Google Assistant, Siri by Apple, or even Amazon Echo & Alexa Devices among others. Notably, she’s designed to help you discover more things that you need and help you find files, settings, and much more.

Basically, Cortana on a Windows 10 PC is easily accessible through the search button in the Windows taskbar. Bearing in mind, this is right beside the Start button. Or rather, you can just hit the Windows key and start typing. From the taskbar, you can start to type in the search box for text queries.

Get Started: Your personal productivity assistant in Microsoft 365

In the same fashion, you can equally click on the microphone button to use voice recognition and perform tasks hands-­free. Furthermore, Cortana can be configured on a Windows 10 PC or tablet to wait and listen. With a quick settings change, all you have to do is say “Hey, Cortana” to wake the feature.

To enable the “Hey, Cortana” feature, simply click or tap the search button in the taskbar. It’s right beside the Start button and then clicks the Settings cog icon on the bottom left. Equally, enabling “Hey Cortana” is the second option down.

Why is It being Discontinued by Microsoft?

Notably, all voice-activated personal assistants are supposed to make our lives easier;— which is why tech companies are building them into everything. Amazon’s range of smart speakers come pre-installed with Alexa. While smartphones ship with Siri, Google Now, or Cortana depending on the manufacturer.

You can even find digital assistants built into your home computer now too. Ever since Windows 10 was released, PC users have been able to issue voice commands via Cortana. Just like they do while using their mobile phones. Every security risk needs to be fixed as soon as possible.

Cortana in Windows 10: How it works on the taskbar and in Microsoft Edge

Cybersecurity experts and hackers are constantly trying to find gaps and flaws that allow them to break into computers. And because Cortana is relatively new, virtual assistance has been under intense scrutiny.

Sure enough, a flaw has been discovered that allows hackers to break into a Windows 10 PC using Cortana voice commands – even when it is locked. The problem is that Cortana is always listening. Although this is meant to make your life easier, it means that anyone can issue voice commands to the computer.

Normally, it would be impossible to install malware or hack the computer while it is locked. But, Cortana circumvents the usual safeguards, allowing a hacker to execute the commands that will install malware.

The planned shutdown of the Android and the iOS app versions was first announced in July 2020. In particular, when Microsoft said it would be shifting towards a “transformational AI-powered assistant experience” in its Microsoft 365 apps. And, as such, which would involve refocusing its “areas of innovation and development.”

“As we announced in July, we will soon be ending support for the Cortana app on Android and iOS, as Cortana continues its evolution as a productivity assistant,” reads a Microsoft support note spotted by MacRumors.

At first, it was very exciting news to its end users. That the choices available to Android users to use for querying scores of their favorite football teams and the weather conditions just increased.

Forthwith, as it turned out, some of its users were utterly disappointed by, the ‘Hey Cortana’ feature that only worked when the device is unlocked. As well as whenever the screen is on and the application itself is open. That’s annoying but we’ll take that as a first step even as Microsoft works to overcome such challenges in the future.

Related Topic: Windows 10 Updates | Should you disable them or not?

Especially, in implementing a more convenient and always-on ‘Hey Cortana’ feature. Just like Motorola managed to do with the Moto X’s then unheard of ‘OK Google’ feature years ago.

For instance, be running the latest version of the beta application and have it enabled in the settings. The company has long accepted defeat in the AI wars, too. Whereby, back in 2019, Microsoft CEO Satya Nadella said that Microsoft no longer sees Cortana as a competitor to Alexa or Google Assistant.

In the past year, Microsoft has also removed Cortana from Xbox One, Skype, and Windows 10 Search. Earlier this month, Harman Kardon also started removing Cortana from its Invoke smart speaker, a showcase device for Microsoft’s Halo-inspired digital assistant.

It’s Time You Protect Yourself!

If you can keep hackers out of your house, they won’t be able to access your computer. Of course, just because the chances of falling victim to this particular hacking technique are rare, doesn’t mean you shouldn’t take steps to protect yourself.

Firstly, you must disable Cortana on the lock screen. Secondly, you must install a reliable antivirus suite like Panda Dome. Next, you must update Windows 10 regularly to patch these vulnerabilities as quickly as possible. Microsoft has already released an updated address the Cortana flaw.

You can download the patch directly from Microsoft Security TechCenter, or use Windows Update to fix this and other issues automatically. With the patch applied, you can decide whether to re-enable Cortana on the lock screen or not.

As stated by Microsoft, Cortana is still continuing to redefine the nature of a digital assistant. Particularly, with new AI-powered experiences in Microsoft 365 that are greatly accelerating productivity. More so, in order to help save you time and focus on the things that matter most.

Microsoft states that “as we make this shift towards a transformational AI-powered assistant experience in Microsoft 365, we need to adjust our focus areas of innovation and development. In order to give our customers assistance where they need it most. As a result, we are making changes to some U.S. consumer-centric features and functionalities with lower usage.”

Related Topic: Windows 11 | Key Features & What it Means for Developers

The first change was to end support for all third-party Cortana skills on September 7. Then, in early 2021, they stopped supporting the Cortana app for mobile (iOS and Android). Simply, because you can now manage your calendar and email, join meetings, and do so much more via their new productivity-focused experiences.

And they are quite many — like the Cortana Windows 10 experience, Cortana integration in Outlook mobile, and soon Cortana voice assistance in the Teams mobile app as well. In addition, after careful consideration, they also decided to end support for other Cortana service integration too. Like in the case of Harman Kardon Invoke Speaker in early 2021.

Primarily, most of their customers use Invoke to play music because of its premium quality sound. To make sure you can keep listening to music or your favorite podcasts, they’ve worked closely with Harman Kardon. More so, in order to create a Bluetooth-enabled device transition plan that they hope will help ease the impact of this change.

Customers who receive a firmware update from Harman Kardon in early 2021 will still be able to continue listening to their favorite music, podcasts, and radio stations on their Invoke via Bluetooth.

Personally, since I use this digital assistant on my Windows 10 PC installation, it’s quite helpful. In that case, it is able to sync all my data. Of course, this has been always how the AI-powered digital assistant has worked on Android since it was in private beta.

Once again, the entire process is of interest as one can do exactly all that but using their voice. But, it’s quite unlucky for some of its users — due to its death on iOS and Android — who didn’t experience it fully. With that in mind, in this article, you can also learn how to search in Windows 10.

More so, in order to find a file, folder, or program faster, while using 2 different methods. In nutshell, according to Microsoft, they’ve spent a lot of time thinking through this transition. And, as such, they fully understand that these changes may be disruptive to some of their customers.

Eventually, that’s why they look forward to continuing to innovate on ways Cortana can help you navigate the modern workplace. So that, in the end, you can save time and focus on the things that matter most in your day. And now, having said that, have you tested Cortana yet? If not yet, it’s time you give it a try.

But, if you are one of it’s key end-users, you can share some of your opinion thoughts, suggestions, contributions, or even other related questions in our comments section. All in all, if you’ll need more support, you can always Get In Touch and let us know how we can help you.

You enjoyed reading this Blog Post, right? Well, Subscribe to our Free Newsletters Daily and never miss a thing from us:
previousLink Building Tactics | 7 Tips For More Organic Rank & Traffic
nextWhat is Mint good for? 5 Health Benefits you Should know