What Is Metaverse? The Next Cloud Technology Outlook

Metaverse is some form of new cloud technology that has changed the way we connect. We’ll have shared life’s moments with our friends and family, make new friends, and reconnect with old ones. Next, we’ll be taking a giant step forward to move beyond 2D screens. And then, towards immersive technologies that enable a sense of true presence.

All this while investing in AR and VR technologies that merge the physical and virtual worlds to create new opportunities for everyone. A future built by everyone, for everyone! Especially, where your imagination is more important than the circumstances of your birth. And where you can represent yourself however you want. 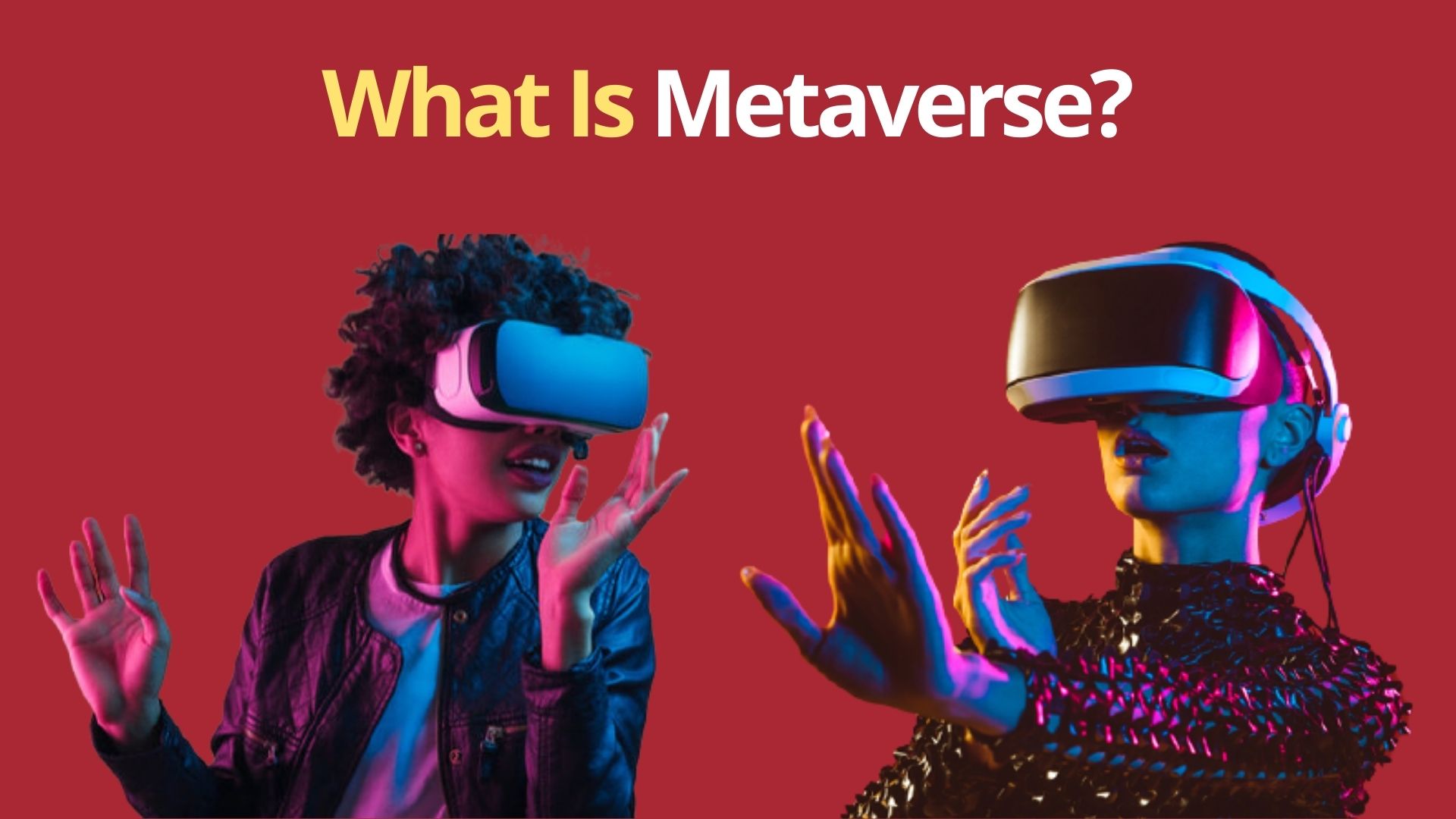 In general, Metaverse will allow a future that everyone will have a stake in. For instance, where individuals and businesses will be able to build, own, invest, sell, and be rewarded for a vast and diverse range of creative output. Including games, different experiences, objects, and spaces. So, what is it really?

Technically, Metaverse is a collective virtual shared space, created by the convergence of virtually enhanced physical reality and physically persistent virtual space. Including the sum of all virtual worlds, augmented reality, and the Internet.

In nutshell, it’s more of a concept that involves creating digital worlds that multiple people can inhabit at the same time. And, of course, as a buzzword, Metaverse refers to a variety of virtual experiences, environments, and assets that gained momentum during the online-everything shift of the pandemic.

Together, these new technologies hint at what the internet will become next. For sure, crypto masters say they’re building it. Whilst, gamers might already be living in it. Generally, the whole art world is cashing in on it. Even webmasters and web veterans are trying to save it.

Perse, the term comes from digital antiquity: Coined by the writer Neal Stephenson in his 1992 novel, “Snow Crash.” And then, reimagined as the Oasis in the Ernest Cline novel “Ready Player One.” Notably, it refers to a fully-realized digital world that exists beyond the analog one in which we live.

In fiction, a Utopian Metaverse may be portrayed as a new frontier where social norms and value systems can be written anew, freed from cultural and economic sclerosis. But, more often Metaverses are a bit Dystopian — virtual refuges from a fallen world.

Where is Metaverse being used?

Talking about Metaverse, many companies are already embraced to see a fruitation of this technology. The likes of Apple, Google, Samsung, The Walt Disney Corporation, Nintendo, Nvidia, Facebook, Amazon, Microsoft, Epic Games, and more.

Remarkably, video games like Roblox and Fortnite, and Animal Crossing (New Horizons), in which players can build their own worlds, have Metaverse tendencies, as does most social media. Equally important, if you own a non-fungible token or even just some crypto, you’re part of the Metaversal experience too.

Related Topic: Blockchain Technology | How It Helps Mine Cryptocurrency

In short, virtual reality and augmented reality are, at a minimum, Metaverse adjacent. If you’ve attended a work meeting or a party using a digital avatar, you’re treading into the neighborhood of Metaversality as well. Many founders, investors, futurists, and executives have all tried to stake their claim in it too.

Their main argument is by expounding on its potential for social connection, experimentation, entertainment, and, crucially, profit. It’s just going to continue the blend! Until we’re all wearing goggles, or living in tanks of goo. More so, after a gradual and disorienting transition from the internet of today. And, perhaps, more Metaversal than it gets credit for.

Technology companies and executives have started to increasingly discuss building a “Metaverse” as a successor technology to smartphones and the mobile internet. Generally, technologists consider a Metaverse a virtual world where large numbers of people can gather to play, work and socialize.

The Metaverse is closely related to virtual reality and augmented reality technologies currently being developed by Apple, Google, Amazon, and Microsoft. In addition to Facebook’s Roblox Network. Roblox is a game targeted at children whose parent company is valued at over $44 billion.

And, as such, Roblox is often considered an example of a Metaverse. Surprisingly, Facebook has already created an executive team to work on Mark Zuckerberg’s vision for a digital universe.

From one of jmexclusives credible sources (CNBC), Facebook is already on course. Whereby, it intends to create a product team to work on the “Metaverse.” On that note, “the Facebook Metaverse Team will be part of Facebook’s virtual reality group” Reality Labs, Executive Andrew Bosworth.

Technically, Facebook is heavily investing in AR and VR technologies. Simply, because they offer the company the possibility of controlling its own hardware platform.

“I think we will effectively transition from people seeing us as primarily being a social media company to being a Metaverse company,” Facebook CEO Mark Zuckerberg.

Facebook is heavily investing in AR and VR technologies because they offer the company the possibility of controlling its own hardware platform if they end up taking off, instead of being controlled by rules Apple and Google place on their app stores.

What are the Key Pros of Metaverse Technology?

The Metaverse will merge the physical and virtual worlds into a new space. This can fundamentally change almost every aspect of our lives. For example, we’ll be able to travel, learn, work, consume entertainment, shop, and connect with others in the Metaverse.

Friends and families, creators, and businesses will be able to do more and experience things we never thought possible in this new space. Creators will be the heart of the Metaverse too. Individuals and businesses can create many new kinds of content – virtual experiences, virtual spaces, virtual objects, and virtual games – for themselves and others to explore.

Related Topic: What Is Cloud Computing? A Step-by-step Beginners Guide

The Metaverse will unlock new opportunities to earn a living and be rewarded for a vast and diverse range of creative output that hasn’t existed until now. Not only will this change the way people buy, sell, and do business online, but it will also unlock a future where someone’s imagination is the only limit.

The Metaverse will enable us to do and experience things that wouldn’t otherwise be possible. Meaning, you can see the world, traveling to Paris, or to Mars. Or even explore other peoples’ perspectives and experiences, walking a mile in someone else’s shoes, or seeing the world through the eyes of a child.

You can get a backstage pass at a concert or a behind-the-scenes tour of your favorite museum. The Metaverse makes experiences richer and more immersive.

The Metaverse will transform the way we connect with others by removing barriers. Instead of seeing a nephew take his first steps on a video, we’ll be able to walk alongside him even if it’s on the other side of the country or the globe.

Instead of just catching up with a friend on video chat, we’ll experience a virtual concert together. The Metaverse will help you feel together even in the moments when you can’t be together.

Which are the Main Cons of Metaverse Technology?

As we boat towards this new technology, my thought is that there need to be numerous functions addressing various user-based concerns. Such as personal data privacy, the amount of time spent online, mental health and wellbeing for the users, bullying, harassment, hate speech, misinformation, etc.

Bearing in mind, just like many organizations today (like Facebook, Amazon, Tesla, Microsoft, etc.), it’s also likely that one company could dominate the space too. Again also, the amount of advertising and quality user experience is yet another concern.

Take for example Google in terms of advertising dominance. Another critical question is; would there be the affordability of equipment for both small and large scale consumers? What about social intrusion?

Who will be answered to all vices that at the moment we have failed to evade? Such as cyberbullying, cyber theft, human trafficking, child abuse, child labor, etc.

Lastly, I also see some loss of jobs due to automated service solutions. Like in the hospitality industry, banking, education, manufacturing, tours/travel, etc. But, there’s the best approach for the federal government to take when addressing issues related to large technology companies.

Which do you think is the best government approach scenario?

The Metaverse is a “successor state” to the modern internet, with all the same content but fewer limitations as to where and how that content can be accessed. Of course, many current online platforms allow users to move about somewhat freely within the confines of specific services.

However, they limit interoperability between platforms: you can build anything in “Minecraft,” but you can’t transfer your creations into a “Fortnite” map. The Metaverse will allow users to generate their own content. And then, distribute it freely throughout a widely accessible digital world.

Unlike the modern internet, Metaverse users will experience changes in real-time by all users. If a user makes any kind of change to the Metaverse, that change will be permanent and immediately visible to everyone else.

The persistence and interoperability of the Metaverse will afford users increased continuity of identity and experience compared to the modern internet. In the Metaverse, users won’t need to have separate Twitter profiles.

Or rather, “Fortnite” characters, and Reddit accounts. As a result, they’ll simply be themselves across all channels. This continuity of identity will be a core factor behind how users purchase and consume content in the Metaverse.

“The brands that are progressive in this area are the ones that understand the fact that self-expression is such an important component of why people spend so much time online,” said Christina Wootton, VP of brand partnerships at Roblox. “They can be who they want to be.”

So, with that in mind, and now that you know what Metaverse is, and how it works, let’s know and hear more about some few insights from you. Whereby, you can either send your answers to us or even share them in our comments section below.

In that case, feel free to share some of your opinion thoughts, suggestions, contributions, recommendations, or even questions in our comments section below. And, all in all, if you’ll need more support, you can Contact Us and let us know how we can help.

Authors Tip: Before today, were you aware that Facebook owns Oculus, and develops AR/VR headsets? Of course, now you know! Now, go ahead and boast to your family and friends!