What is Cayenne Pepper Powder good for? Health Benefits

Cayenne Pepper Powder may have many health benefits that are the result of its active component, capsaicin. For instance, it may reduce your appetite and help lower blood pressure, among many other benefits.

If you’re worried that cayenne peppers may interact with your current medication, it’s best to check with your doctor. Many people consider cayenne peppers to be the king of medicinal herbs. In fact, these peppers have been used for thousands of years to help treat many health problems. 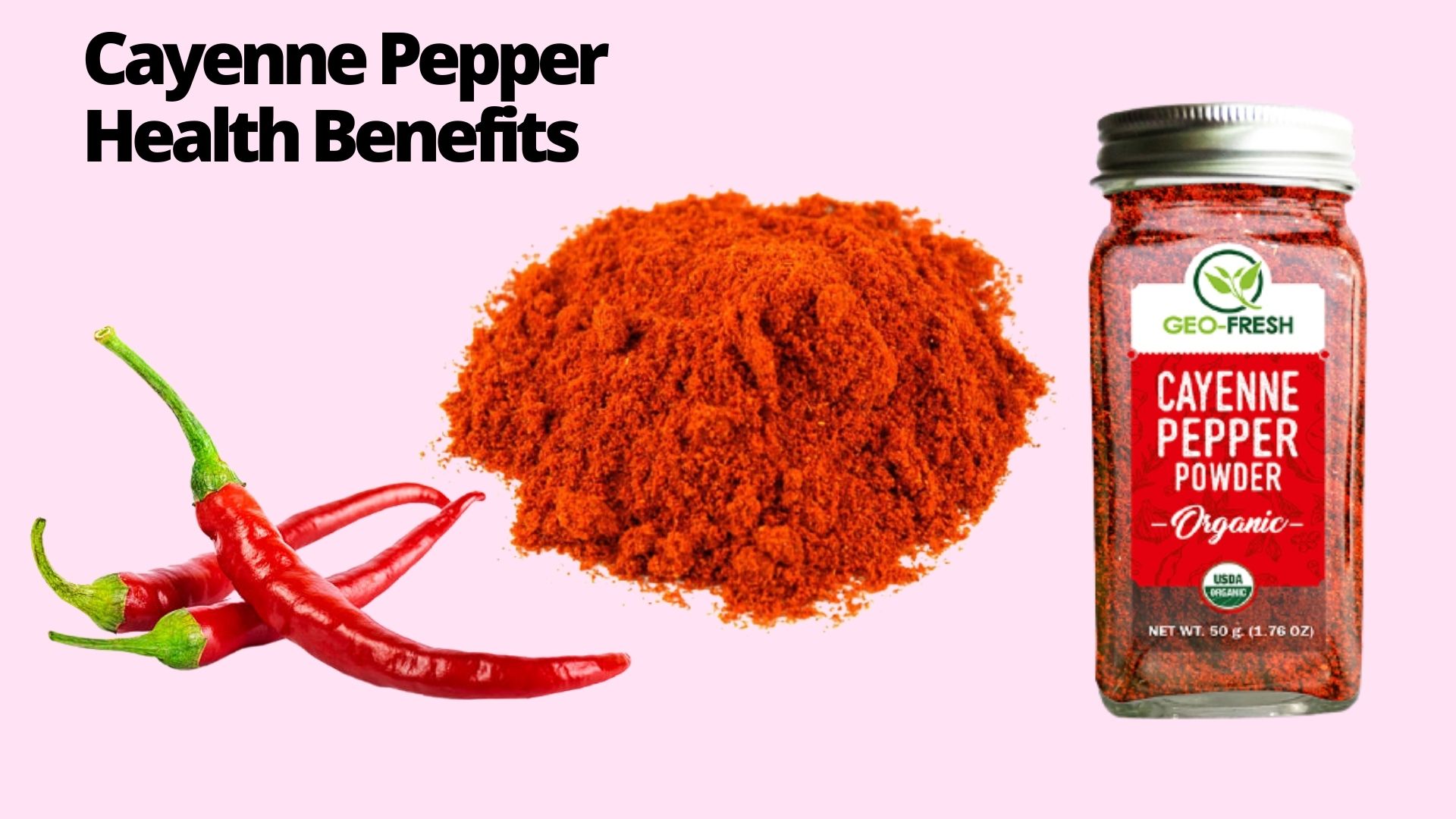 Not only do they have medicinal properties, but cayenne peppers are also great for cooking and contain several beneficial nutrients. Before we proceed, it’s important to realize, another name to call Cayenne Pepper is Chili Pepper (Buy Online).

What is Cayenne Pepper Powder?

Cayenne Pepper Powder is just another type of Powder made from the commonly known Chili Pepper. Whereby, the Chili Pepper is normally thin in size, green to red in color, and about 2 to 5 inches long. It belongs to the nightshade family of flowering plants and are closely related to Bell Peppers and jalapeños.

Notably, Cayenne Peppers were originally grown in Central and South America but brought to Europe in the 15th century by Christopher Columbus. They are a popular spice used in many different regional styles of cooking, and they have been used medicinally for thousands of years.

Related Topic: How to Treat Arthritis at Home with these Simple Remedies

As an example, the “Cayenne Pepper Spice” you find mostly in pizza restaurants is the dried, ground version of this pepper. For your information, the word “Cayenne” comes from the “City of Cayenne” in French Guiana, from where the pepper originates.

And also, it’s where its first documented uses were found (as a common food additive). Perse, these Peppers boast an impressive nutrition profile. Including and not limited to a variety of antioxidants that are beneficial for our overall health wellness.

What is Cayenne Pepper Powder good for?

Capsaicin has appeared to reduce blood pressure in animal studies. Simply, because it has powerful pain relief properties. It relieves pain by reducing the amount of substance P that your body produces.

Likewise, Capsaicin Creams may help improve symptoms of psoriasis. Especially, by helping reduce the amount of substance P produced by your body.

It also has shown promise in cancer research too. Although further human studies are needed before any conclusions can be made. In addition, the powder may also help improve your digestive health and reduce your risk of stomach ulcers.

Related Topic: What is Mint good for? 5 Health Benefits you Should know

In addition to being a popular ingredient in spicy dishes worldwide, Chili Peppers also have a surprising role in the medical world. Not forgetting, Capsaicin is the compound found in almost all peppers. Whilst, giving them their infamous hot and spicy kick.

This compound is well-known for its pain-relieving properties. It works by affecting the neurotransmitter that communicates pain signals to the brain. In this way, it can reduce the perception of pain. Basically, once the capsaicin is extracted from the pepper, it can be added to creams, gels, and even patches.

Generally, it’s patches are used as a pain-relief treatment. In other words, Capsaicin Cream has been studied as a possible treatment option, especially, in order to reduce pain in a handful of conditions.

Related Topic: Monk Fruit Sweetener | How is it Organically beneficial?

As I mentioned, the overall health benefits of Chili Pepper include improved digestive health and metabolism. It alleviates migraines, may reduce risks of cancer, it fights fungal infections, colds, and even the flu. In addition, it provides joint pain relief, fights inflammation, supports cardiovascular health, and may improve cognitive functions.

Likewise, it may also improve longevity, promotes red blood cell growth, improves ocular health, keeps your hair and skin healthy, and much more. Furthermore, Chili Peppers are popular for their ability to improve the taste of any meal with their hot flavor. However, they are more than just a little bit of heat.

And that’s why they are mainly used as a spice and this can be cooked or powdered and dried. Bearing in mind, the most valuable characteristic is the compound capsaicin that gives them their distinct taste. And, with that in mind, you can see 13 Amazing Health Benefits of Chili Pepper in detail.

How to Make Cayenne Pepper Recipes — For Beginners

Surprisingly, it’s very easy to make your own pepper powder at home with the right guidance and tools. Particularly, from fresh garden-grown or store-bought cayenne peppers with a dehydrator. It is super easy to make and you won’t get any fresher.

In that case, it’s important to consider using a dehydrator as your best savior. While also, keeping in mind, dehydrating was one of the earliest forms of food preservation, to begin with. Since all it required was a safe place to keep the food while all the moisture dried out.

Dehydrating foods concentrate flavors, so fruit tastes sweeter and herbs more flavorful than their fresh counterparts. So, whether you want to preserve an overabundance of home-grown produce, create homemade fruit rollups, or even treat your pooch to fresh dog treats, food dehydrating is a fun and healthy alternative to store-bought snacks.

Technically, electric dehydrators make the drying process nearly foolproof! Of course, thanks to precise temperature controls and proper air circulation. Most dehydrators have stackable trays to maximize drying area. And there are small and extra-large models depending on how much food you need to dehydrate at once.

Unfortunately, a number of factors can affect drying time even in the controlled environment of an electric dehydrator. Such as uneven slicing, variations in fruit or vegetable size, or different amounts of moisture. Therefore, it’s good to take the time to prep foods. So that they’re similar in size and thickness will ensure the best results.

For instance, a mandoline slicer can help ensure even cuts of fruits and vegetables. That said, it’s time to make your own Homemade Cayenne Pepper Powder Recipe now. Yes! It’s dehydrating time again, my friends. It’s just that time of year. When the garden is going WILD (in such a good way), it’s time to make powders for using all year long.

Personally, I grew a variety of Cayenne Pepper this year (when Corna came knocking). With the specific intention of making Homemade Cayenne Pepper Sauce perse. As well as cayenne powder, and here we are, making it, today!

Herbs and spices are magical for turning a dish from just okay to ‘oh yay!’ The homemade chili flakes (aka chile flakes) are no different. Sprinkled over, or mixed into meals, these red chili flakes pack a fiery heat and add tons of flavor to a dish. You can also learn about What is Paprika in detail.

In many Recipes, Cayenne Peppers are usually used as a dried spice (made by drying and grinding the Peppers or pulping and baking them into cakes) — and are then ground to produce the spice. Additionally, they can also be used fresh in dishes, but are a little harder to find outside of the powdered form.

How to Grow Cayenne Pepper Plant?

To extract the Cayenne Pepper Powder, you can either source the product from your local market, buy online, or even grow your own plant. Natively, the Cayenne Pepper Plant is sub-tropical to tropical. But, naturally, they can be grown as annuals in temperate climates as well.

They can even be overwintered if not protected from frost. Cayenne plants like some heat with a longer growing season and lots of sunshine. Although they can react poorly to too much heat as much as too much cold. In that case, plant your seeds when temps are a minimum of 60 degrees F (16 degrees C) in well-drained soil.

Seedlings should be spaced 18-24 inches apart in a row. But, always be careful not to overwater. There are many different types of cayenne peppers, and I have grown many in my own garden. Including, Carolina, Yellow Buist, Dagger Pod, Golden, etc.

Having said that, you can harvest your cayenne peppers when the skins are somewhat waxy in appearance, and the flesh is firm. If they’ve started to soften, they most likely have started to rot. And, therefore, it is too late to pick them.

The color should be a vibrant red and the pods will be anywhere from 2 to 5 inches long. You can pick your cayenne peppers when they are green. Though the flavor will be somewhat grassy and the heat not so intense. Oftentimes, these pods usually ripen in 70 days.

Health Risks and Dietary Precautions to Know About

On a clear note, Cayenne Peppers are generally recognized as safe to eat. However, eating too much cayenne pepper in one sitting may give you a stomach ache and make you feel sick (28). If you are taking medications for high blood pressure, such as ACE inhibitors, you should check with your doctor first.

More so, before trying any Capsaicin Cream, as it may cause coughing. Also, if you take a blood thinner like warfarin, check with your doctor before trying cayenne peppers since they may increase your risk of bleeding (30Trusted Source).

Lastly, when applying capsaicin cream to your skin, do not apply it to an open wound or broken skin. They are considered a somewhat hot pepper, ranging from 30,000 – 50,000 Scoville Heat Units (SHU) on the Scoville Scale, which is about as hot as a serrano pepper.

If you compare that to a typical jalapeno pepper, which averages around 5,00o SHU, the hottest cayenne is about 10 times hotter. And now, what is a good substitute for cayenne pepper? If you happen to run out of cayenne powder, there are many different powders, blends, and even hot sauces that you can use (learn more).

In nutshell, Cayenne Pepper Powder or Chili Peppers are great because they have a good heat level, but not insanely crazy hot, as well as having great flavor, and the color is so vibrant red. They make for outstanding powders and powder blends. Not to mention, Cayenne Peppers are easy to incorporate into your diet.

As I mentioned, Cayenne is great in soups and sauces, on pizzas, as well as over meats and even some kinds of seafood dishes. Keep it on the table in a shaker as an alternative to salt or pepper. And then, try adding a pinch of it to some of your favorite meals.

In general, you can either Buy Fresh or Frozen Peppers at most supermarkets in a variety of forms – the most noticeable form being the red powder. But, the majority of Chili Flakes that can be found on the market are from Cayenne Peppers.

In addition, the vast majority of popular hot sauces all rely on cayenne for part of their kick, particularly if the sauce also contains vinegar. That’s It! You now have a full guide on why you should consider a pinch of Chili Pepper (Powdered) in your dietary plan.

But, if you’ll need more support, you can Contact Us and let us know how we can help you. And then, finally, you can also share your additional opinion thoughts, suggestions, contributions, or even questions in our comments section below.

You enjoyed reading this Blog Post, right? Well, Subscribe to our Free Newsletters Daily and never miss a thing from us:
previousWebsite Mobile App | Bootstrap Compatible Design Guideline
nextMobiLoud Plugin | How To Convert Your WordPress Site To An App