How Web Applications Work | With Example & Use Benefits

Theoretically, many Web Applications have grown up a lot, and are now consuming more data than ever before. The biggest thing holding them back was the traditional HTTP model of client-initiated transactions.

To overcome this, a number of different strategies were devised to allow servers to push data to the client. One of the most popular of these strategies is HTTP Long Polling. Keeping an HTTP connection open until the server has some data to show clients. 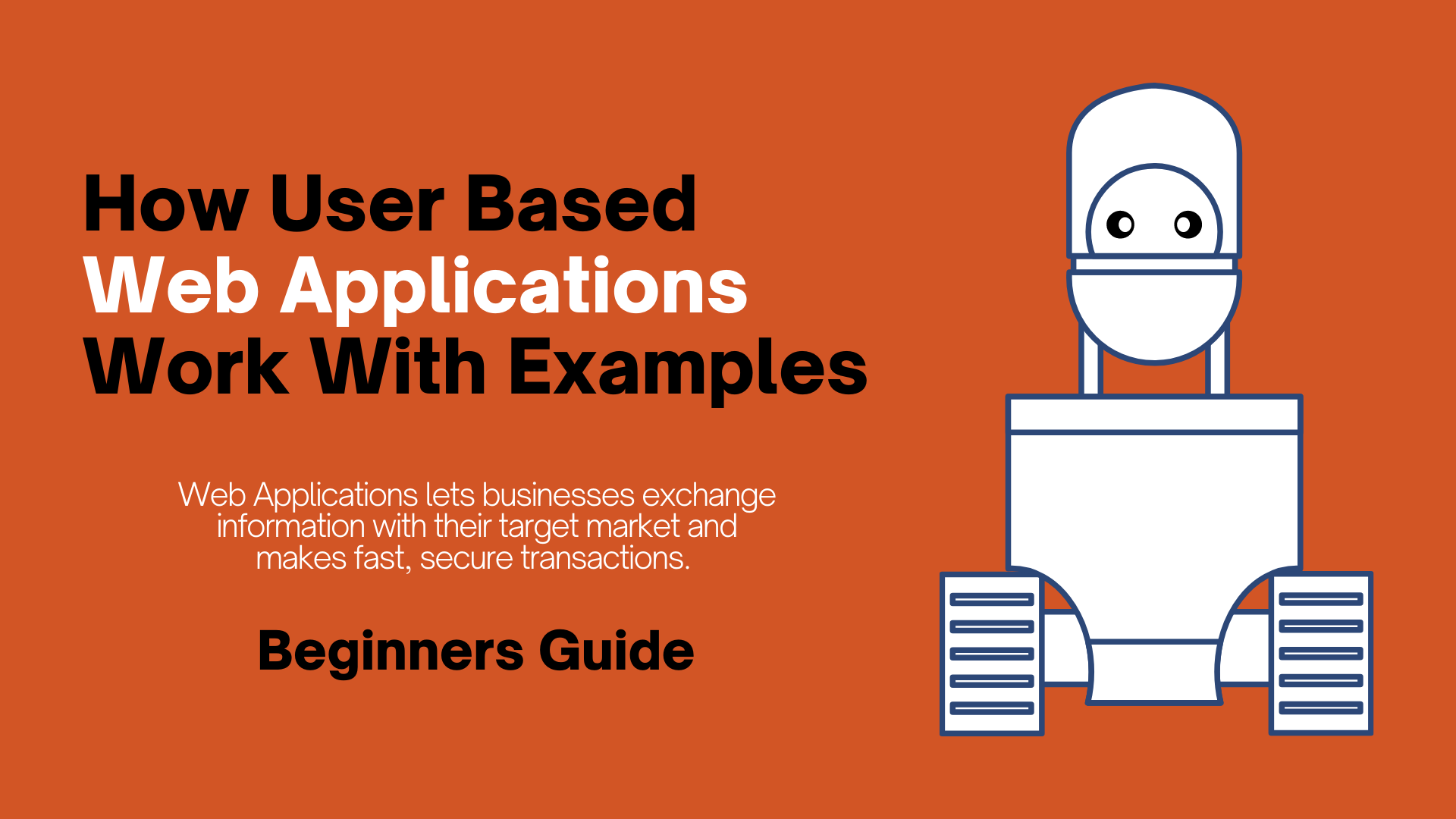 Unfortunately, the problem with all of these solutions is that they carry the overhead of HTTP. Every time you make an HTTP request, a bunch of headers and cookie data are transferred to the server.

Related Topic: WebSockets | What are they & How are They Used?

Initially, HTTP was thought to be modified to create a bidirectional channel between client and server. But, this model could not sustain because of the HTTP overhead and would certainly introduce latency.

However, in real-time applications, especially gaming applications, latency cannot be afforded. Thus, because of this shortcoming of HTTP, that’s why a new protocol that’s now known as WebSocket was designed. Essentially, to run over the same TCP/IP model.

What are Web Applications?

Web Applications are computer programs that utilize web browsers and web technology to perform tasks over the Internet. Each day, millions of businesses use the Internet as a cost-effective communications channel. Mainly, they came to prominence with the advent of Software as a Service (SaaS) movement.

As such, Web Applications lets businesses exchange information with their target market and makes fast, secure transactions. However, effective engagement is only possible when the business is able to capture and store all the necessary data.

In addition, businesses must also have a means of processing this information and presenting the results to the user. Almost all Web Applications use a combination of server-side scripts (PHP and ASP). In order to handle the storage and retrieval of the information.

Additionally, the applications allow employees to create documents, share information, collaborate on projects, etc. As well as work on common documents regardless of location or device. And unlike mobile apps, there is no specific SDK for developing web applications.

How is a Website, a Web App & a Mobile App different?

A Website is a group of globally accessible, interlinked web pages which have a single domain name. It can be developed and maintained by an individual, business or organization. A website (such as jmexclusives) aims to serve a variety of purposes. For example, we have a dedicated blog page that constantly updates content.

In most cases, a majority of websites are hosted either on a single web server or a multiple web server platforms. And are easily accessible through a network like the Internet or a private local area network using an IP address.

As I said, a web application is a software or program that’s accessible using a web browser. Its frontend is usually created using languages like HTML, CSS, Javascript, which are supported by major browsers. While the backend could use any programming stack like LAMP, MEAN, etc.

Lastly, a mobile application (also called a mobile app) is a type of application designed to run on a mobile device, which can be a smartphone or tablet computer. Even if apps are usually small software units with limited function, they still manage to provide users with quality services and experiences.

Contrary to applications designed for desktop computers, mobile applications move away from integrated software systems. Instead, each mobile app provides an isolated and limited functionality. For example, it can be a game, a calculator, or a mobile web browser.

Why are Web Applications important?

Surprisingly, it’s the increased use of the Internet among companies and individuals that has influenced the way businesses are run. And as a result, this has led to the widespread adoption of Web Applications and their attached tools.

Why? Simply, because companies are shifting from traditional models to cloud-based and grid models. So to speak, one of the key values of Web Applications is that they give businesses the ability to streamline their operations. Whilst, increasing efficiency, and reducing their running costs.

Equally important, online apps such as email clients, word processors, spreadsheets, and other programs provide the same functionality as the desktop versions. However, they have the added advantage of working across multiple platforms.

They also have a broader outreach and are being easily accessible from anywhere. As an example, let’s consider Web Applications like online forms, shopping carts, word processors, spreadsheets, video, and photo editing. As well as file conversion, file scanning, and email programs — such as Gmail, Yahoo, and AOL.

Not forgetting, some of the most popular Application Servers include Google Apps and Microsoft 365. Whereby, Google Apps for Work has Gmail, Google Docs, Google Sheets, Google Slides, online storage, and more.

Other Benefits of Web Applications include:

In addition, other functionalities of Web Apps include online sharing of documents and calendars. Whilst, letting all team members access the same version of a document simultaneously.

For your information, Web Applications (like jmexclusives) are usually coded in a browser-supported language. Such as JavaScript and HTML as these languages rely on the browser to render the program executable.

Some of them are dynamic, requiring server-side processing. Others are completely static with no processing required at the server. In particular, almost every Web Application requires a Web Server for various reasons.

Such reasons include managing requests from the client. Or even for an application server to perform the tasks requested. And, sometimes, for a database to store the information provided. When we talk of an Application Web Server Technology ranges from ASP.NET, ASP, and ColdFusion, to PHP and JSP.

By the same token, when talking about these Web Applications, we can not forget also to mention the role of the Border Gateway Protocol (aka BGP). Since it’s the web protocol that makes the Internet work.

What Is Border Gateway Protocol?

To enumerate, Border Gateway Protocol (BGP) is a standardized gateway protocol that exchanges routing information across Autonomous Systems (AS) on the Internet. Networks or autonomous systems that need to interact with each other do so through peering.

When one network router is connected to other networks it cannot determine which network is the best network to send its data to by itself. In that case, the Border Gateway Protocol considers all peering partners first. Especially, through a router connection.

It then sends traffic to the router that is closest to the data’s destination. This communication is possible because, at boot, BGP allows peers to communicate their routing information. And then stores that information in a Routing Information Base (RIB).

One of the most popular networking equipment companies in the world is Cisco. Their Networking Academy transforms all the lives of learners, educators, and communities at large. Through the power of technology, education, and career opportunities. And it’s Now Available to anyone, anywhere!

Finally, it’s my hope that you’ve gathered enough details in regards to the above-revised guide on Web Applications. However, what if you’ll have conflicting opinion thoughts, contributions, suggestions, or questions?

Well, you can share them in our comments section below. Likewise, you can also Contact Us for more support or help. Whether it’s in regards to this topic or any other blog articles that are similar.

Whew! If you've enjoyed our Weblog Content feel free to Subscribe to our Daily Newsletters and never miss anything from us Partnership:  Advertise  your Brand, Business, or Products through our Blogging Site starting from $100 for YouTube Ads, $75 for Banner Ads, $55 for Permanent Posts, $25 for Dofollow Links or ask for Guest Blogging through our Contact Form below
previousBest SEO Tactics For Getting More Rich Snippets CTR & Ranking
nextWhy Is Social Media Engagement Important? A Novice Guide