Download Malwarebytes 4.0 for your Windows or Mac Pcs as well as Android and iOS powered devices. The upgraded Malwarebytes 4.0 is smarter, faster, and lighter than ever before. Redesigned Malwarebytes for Windows/Mac inside and out to be more intuitive, tougher against threats, and easier on your PC.

Notably, Malwarebytes Download is available in both a free and a premium paid version. Whereby, the free version can be run manually by the user when desired. Whilst the paid version can perform scheduled scans, and automatically scan files when opened. In addition, it blocks the IP addresses of malicious web sites. Scanning only those services, programs and device drivers that are currently in use.

As formerly known Malwarebytes Anti-Malware, (abbreviated as MBAM) is an anti-malware software for Microsoft Windows, macOS, Android, and iOS. Eventually, that finds and removes some if not all cybersecurity and malware threats.

Obviously, there are several reasons why Malwarebytes upgrade is necessary. There are also some reasons why it makes sense to prudently protect all of your precious data. Particularly, from the proliferation of complex and malicious computer viruses.

Got a computer overburdened by tough-to-remove malware infections? Malwarebytes for Windows Free specializes in ridding infected PCs of every last Trojan, worm or virus.

By working alongside traditional antivirus software, it adds an extra kick to your protection. With thorough scanning, heuristic analysis, and artificial intelligence.

But, forget about getting creature comforts such as a password manager or a file shredder.

When you download Malwarebytes 4.0, it uses a layer of technology like anomaly detection (a cool sort of artificial intelligence).

As well as, behavior matching, and application hardening to crush malware that hasn’t even been seen before. Alright, so not really like traditional antivirus.

Simply, because it is free and when you download Malwarebytes, it’s singularly focused on finding and killing malware, adware, and unwanted software that other programs often miss.

It has been said that we live in the Information Age. Thanks to the continuing advances in our high-tech electronics and communications. Like the internet, cell phones, smartphones, and MP3 players.

How is Malwarebytes used?

Made by Malwarebytes Corporation, Malwarebytes was first released in January 2006. Currently, it’s available in a free version. In that case, which scans for and removes malware when started manually.

Not forgetting, its paid version, which additionally provides scheduled scans, and real-time protection. As well as, a flash-memory scanner. Therefore, it’s primarily a scanner that scans and removes malicious software. Including rogue security software, adware, and spyware.

On December 8, 2016, Malwarebytes Inc. released version 3.0 to the general public and now it has introduced version 4.0. This includes protection against malware, ransomware, exploit, and malicious websites. They’ve all kinds of information literally a mouse click or touchscreen away.

And by all means, Malwarebytes offers the following Endpoint Protection & Response Support.

Protects endpoints against cyberattacks with a multi-layered approach that leverages static and dynamic techniques at every stage of the attack chain.

Learn more: How to install Malwarebytes on Windows

It integrates protection with endpoint detection and response (EDR) capabilities via a single agent to eliminate complexity.

Learn more: How to install Malwarebytes on Mac

Proactive protection against malware, ransomware, and other dangerous threats on what is becoming everyone’s most popular computer.

Rapidly, on Android, responds with centrally-managed remediation. Centrally managed advanced threat detection and automated remediation at the click of a button.

Block scams and protect your privacy. Make your iOS experience safer and faster while getting rid of annoying distractions like fraudulent calls and texts.

It protects endpoints against cyberattacks with a multi-layered approach that leverages static and dynamic techniques at every stage of the attack chain.

Malwarebytes has built an impressive fan-base around its free anti-malware application designed to fend off viruses, spyware, Trojans, worms, dialers, rootkits, exploits, and malicious website as well as other web-based threats.

The free version does not include scheduled scans, real-time protection, removable drive scans, and malicious website blocking. These features and more are available in the paid edition, called Malwarebytes Anti-Malware Premium. 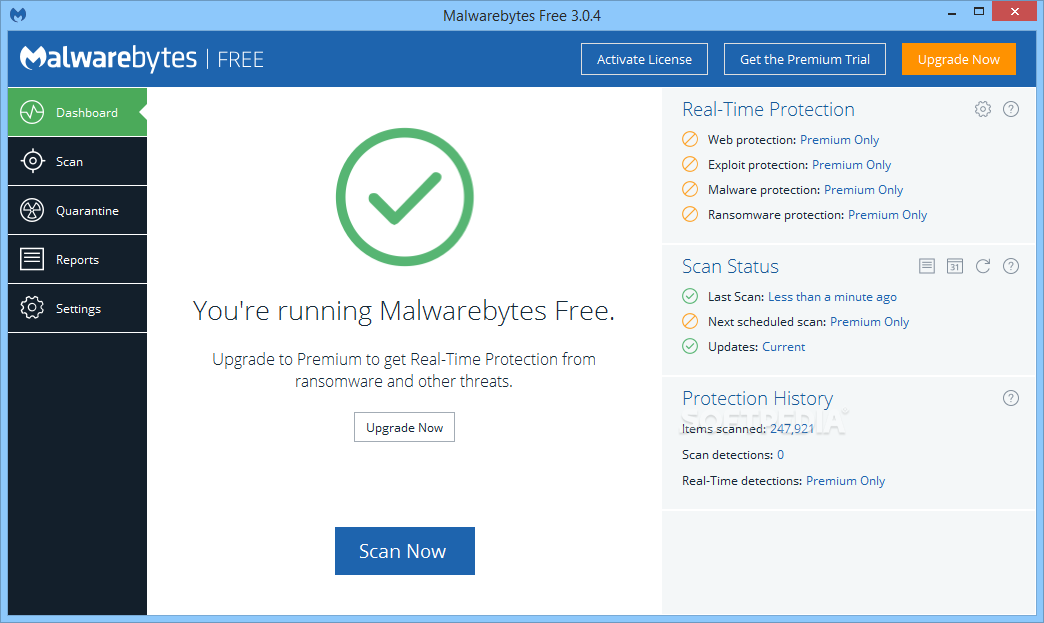 There are two sides to Malwarebytes Anti-Malware’s story: hardcore PC users who often travel to the dark side of the Internet are better off with faster and more stable utilities.

By pairing it up with a reliable third-party real-time guard, the program can become quite handy to casual users who want to double-check.

Alternatively, look into the premium version (free trial available). The main advantage of the free application is that it can be run as a secondary line of defense against online threats.

By pairing it with the real-time safeguard of traditional antivirus software.

Setting up Malwarebytes Anti-Malware isn’t usually a problem for any user, no matter how inexperienced they may be with antivirus applications.

As for the interface, the tool is as intuitive as they get, thanks to large buttons and short descriptions that explain each option.

Threat Scan is the app’s comprehensive scanning method, as it looks into critical areas of the system where malware is known to hide.

The alternative is Custom Scan, which permits users to handpick the exact drives and directories to look into. Along with the scan objects (memory, startup and registry settings, archives, rootkits).

In addition, it is possible to personalize the tool’s behavior when detecting potentially unwanted programs and modifications (PUMs).

It is possible to enable and examine scan logs and resort to a proxy server for virus database updates. In the end, disabling notifications, integrate the app into the Windows Explorer context menu for quick scanning, and so on.

Items sent to the quarantine can be examined before deciding whether to keep or delete them.

Our most recent tests have shown that Malwarebytes Anti-Malware delivers very good results when it comes to virus detection.

Its main downside, however, is that it frequently hangs during various operations (such as scanning or verifying the latest virus signatures).

And it is generally very slow when it comes to removing the infected files.

Of course, Yes! Malwarebytes scans in batch mode. Rather than scanning all files opened, reducing interference if another on-demand anti-malware software is also running on the computer.

Having said that, Malwarebytes Anti-Malware (MBAM) is one of a number of anti-virus software applications readily available to you, some of which are free downloads.

While the majority of anti-virus software is legitimately helpful and effective, some rogue antivirus software out there can be just as devastating as the viruses they claim to counteract.

Feel lucky that you’ve probably never needed it or anything similar to it due to a virus infecting your computer.

Below are some of my simple and topmost legitimatization facts;

In the first place, there is a free version of Malwarebytes that looks for and eliminates malware, but it needs to be started manually.

Secondly, owing to that, the majority of antiviruses come at a price, the MBAM version that you pay for performs scans automatically on a scheduled basis.

Giving you concurrent protection and has an optional flash-memory scan feature.

Sometimes the constant fluctuations, changes, and upgrades happen so fast that it seems impossible to keep up with them. Every day we are bombarded with commercials and ads extolling the virtues of the newest smartphone app.

Or even, by little pop-up windows on our desktops that appear when we power up our computers. Especially, asking us if we want to upgrade to the latest version of one of our applications. Some fake or rogue anti-malware software will display a warning message pertaining to Malwarebytes.

A few of these scam anti-virus software providers go so far as to advocate for the removal of MBAM. Bearing in mind, it’s easy to fall for these types of scare tactics. But as can be seen, you do not have anything to worry about when it comes to Malwarebytes.

At jmexclusives, We Do The Research So You Don’t Have To. And be that as it may, I hope you have gathered enough information in regards to the above-revised profile. And also, how you can download Malwarebytes 4.0.

Equally important, if you have additional information, contributions or even suggestions, please Contact Us. You can also share some or more of your thoughts in the comments box below this blog post. For your information, below are more useful and related topic links;

NB: Our free to join Guests Posting Program is now open for all qualified bloggers. If a marketer, Email Us Directly if you'd like to Advertise in form of Videos, Banners, Posts, Backlinks, or even more... Otherwise, you can Consult Us for more help below
previousBody Contouring Procedures That You Should Know About
nextHens Eating Eggs Habit Explained | How Do You Stop It?
NB: Below are some Online Digital Services as well as Featured Solution Gigs to bid from freelancers