One of the main reasons why you should consider using Twitter Ads in your marketing campaign strategy is very simple – Twitter has over 310 million active monthly users. Meaning that, if it were a country, it would have the fourth largest population on the planet.

In that case, we can simply say, there’s a huge and diverse audience that can be reached by advertising on this platform. But, why is there still a feeling among many digital marketers that Twitter Ads aren’t really worth bothering about? Well, there’re more reasons to like Twitter Ads. 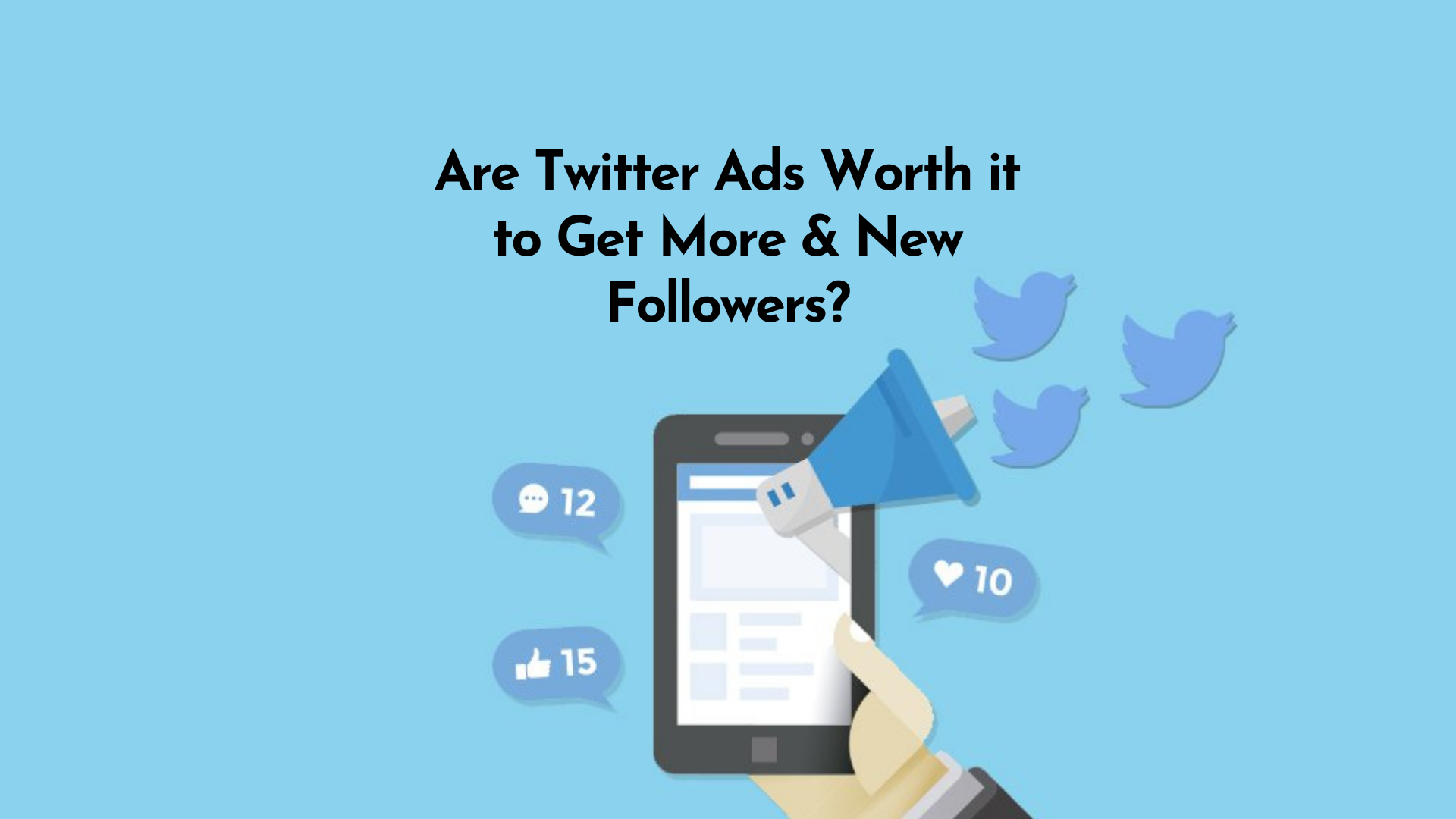 Promoted Tweets have shown an average engagement rate of 1% to 3% – which is much higher than the average for traditional banner Ads. And it’s clear that there is value to be found in such Ads, particularly for reaching mobile users.

Ultimately, in order to achieve the best out of Twitter Ads, it depends on your target audience and what you want to achieve. And as a rule of thumb, it’s always important to understand your audience and where they can be found online.

One thing for sure is that – if your users are active on Twitter and you have an accurate persona then it’s certainly worth some experimentation. Perhaps more so than other platforms, Twitter requires you to keep a close eye on budgets and analytics.

At the same time – you must continually tweak and try different Ad formats to get the best response and reduce your cost per action. However, it’s not the most cost-effective option, struggling to compete with Facebook on this count.

But, if you have a well-defined audience target and a strong value offer then it can expose your brand to a wider audience. Personally, I recommend running some small-budget Twitter Ad trials first as part of any digital campaign.

At the same time, try and increase spending where you see positive results. While partnering it with other platforms to develop a well-rounded multi-channel approach.

In general, I decided to take a look at six key aspects of advertising on Twitter. Thus, this will help settle such claims of its worthiness and at least reach some conclusions. Especially, about how much value it can add to your digital marketing campaigns.

And then thereafter, we’ll see how Twitter Campaigns can increase your lead conversions and CTR rates. But, first of all, depending on what you’re hoping to achieve with Twitter advertising, there are different types of ads you can run.

Below is an overview of the options:

Related Topic: Pinterest Ads | How to Promote your Pins Step-by-step

As can be seen, this range of options means you can be strategic in what you want to achieve with your campaign. After you Create an Ads Account for Twitter Ads, you just need to pick the best way to approach it. And start using Twitter advertising as your next optimal channel for leads generation.

According to the most recent stats, the majority of Twitter Ads have Promoted Tweets of about 88%. So, there is even more scope to stand out from the crowd by exploring alternatives. Below are some of the best alternative methods to consider.

Eventually, compared to Facebook Ads the reach of Twitter Ads is weaker. But, if you know your target audience and have a strong message then 310 million active users on Twitter are still a large audience to explore. And now that the potential reach of Twitter is considerably boosted by MoPub.

About MoPub – it’s a mobile ad exchange platform that Twitter bought back in 2013 (more on that later below). And through the Twitter Audience Portal, your ads can now appear across many additional mobile apps, not just Twitter – raising the potential reach to around 800 million unique users.

Research conducted by Media Science on behalf of Twitter found that users spend 123% more time. Interacting with ads on the Twitter Audience Portal than with traditional mobile interstitial ads. The report also claims that these ads brought an 11% increase in positive sentiment about a brand.

And also, the cost per engagement fell by 30%.

Of course, some have been scared of Twitter Ads by stories about Promoted Trends costing $200,000 for 24 hours. But, not all of the options are quite so budget-busting. More so, when it comes to pricing, it will depend on what your objective is and the type of campaign you’ve chosen.

And as with any platform, the value is generally proportional to how smartly you can utilize the tools at your disposal. Not only that but also working to refine your targeting can lead to finding good value too. In terms of engagement and lead generation.

In my own experience, the cost of new followers can be disproportionately high. However, driving specific actions like clicks and collecting leads can be much more affordable. It generally takes more work to get costs down, and it still is likely to cost more than Facebook.

But, if Twitter is where your audience are to be found then it’s certainly worth that extra work.

The flexibility they provide in terms of targeting your audience is a big plus for Twitter Ads. And there are numerous factors you can use to target your users. Including location, gender, language, devices and platforms, keyword targeting, interests, followers, installed apps, and more.

The combination of these different options means you can get granular to reach the audience most likely to engage. These different targeting factors are almost on par with Facebook. Particularly, when it comes to finding the right audience. But lacks the valuable option of targeting by age.

As an example, of targeting in action, a menswear store in Glasgow wants to use Twitter to promote their new app, which is only available on iOS. Those outside Glasgow who don’t have an iOS device will not be interested, so targeting them would be a waste of budget.

This means that through Twitter targeting, they can promote specifically to males within a 30-mile radius of Glasgow. In regards to those who are browsing Twitter using an iOS device. They could also choose to refine that further by targeting users with certain interests that match their target audience.

By all means, a crucial aspect of any given ad campaign is being able to track effectiveness. While allowing you to refine your approach and get the best possible Return On Marketing Investment (in short ROMI).

In reality, Twitter offers a strong suite of inbuilt analytics. And as such, allowing even the most inexperienced of advertisers to understand how their ads are performing. As they also develop a better overview of their audience.

Additionally, Twitter Analytics provides an overview of the Top 10 interests of your followers. As well as, who else they follow, and a breakdown of their location. You can then measure your tweets’ success using a number of metrics – most importantly reach and engagement.

When you log in to the Analytics section of Twitter you see a handy overview of your performance in key areas over the last 28 days. You can then drill down further to see how individual tweets have performed.

More often, engagement levels are not the easiest metric to accurately gauge for Twitter Ads. Since there is a temptation to see likes and retweets as a solid indicator. But it’s often the case that users or bots share content which they have not actually read.

This may be superficially positive when it comes to engagement and reach statistics, but those ‘prospects’ are unlikely to convert. And in most cases, click-through rates are a better indication of effectiveness.

Even where we cannot be entirely sure of impact, Twitter Ads can be useful for brand awareness. And even if people are not engaging you are still getting your name in front of people who, if you are targeting accurately, could be likely to purchase in the future.

Some research has attributed offline boosts to promoted tweets with an offline sales boost of 29% in one case.

Studies have shown that Twitter Ads have higher average click-through rates than other ad channels. Promoted Tweets have shown average engagement rates of 1% to 3%, which is much higher than the average for traditional banner ads.

Sometimes, the conversions from these clicks are not always as strong. Understandably, this can be caused by page factors such as relevance, design, or copy. And on the contrary, using videos can also help to boost engagement.

Exemplary, a key test by Twitter and jmexclusives found that people watching brand videos on Twitter had a purchase intent lift of up to 28%. The percentage is much higher than those who saw the same video ad as a pre- or mid-roll during a 22-minutes program.

On the other hand, people watching branded content on Twitter were also more likely to stay engaged with a video for more than 30 seconds.

MoPub provides a reliable foundation for a successful, durable app business that thrives in the short- and long-term. The flexible solution is built with your app monetization needs in mind. In short, it’s an app monetization platform that maximizes your revenue.

In that case, by enabling a true unified auction amongst all of your demand sources: ad networks, demand-side platforms (DSPs), and direct-sold deals or cross-promotions. This means you’ll earn more with ultimate demand diversity.

It’s an all-in-one app monetization made easy. Thanks to its unbiased unified auction, your inventory is filled by the highest-paying demand source. And with just one MoPub SDK, you’ll access and manage global advertising demand from over 130 real-time biddings DSPs.

Combine that with your direct-sold deals, cross-promotions, and PMPs. Then add mediation for any ad networks you fancy to ensure you monetize your app within the maximum competition. So, how does MoPub elevate your game? You can learn more about it here.

Finally, it’s my hope that the above guide was useful to you. But, if you’ll need more help, please Contact Us or even share your additional thoughts in the comments section. You can also donate to support our blog articles, research work, and other ongoing projects here.

Our Most Recent Posts

Our Most Popular Posts

How a Fashion Design Sketch is done | Step‐by‐step Guide