AdDollars | The Advertising Marketplace You Should Know

I am introducing AdDollars to those of you who are in the mood to Make Money With Any Site or Blog? Back in 2019, 65% of the money spent on advertising in digital media traded programmatically, according to the Zenith Programmatic Marketing Forecasts report.

Meaning that Advertisers will spend US$84 billion programmatically in the year 2020. Up from US$70 billion last year, which represents 62% of digital media expenditure.

Furthermore, the report predicts that by 2020, advertisers will spend US$98 billion on programmatic advertising. Representing 68% of their expenditure on digital media advertising.

Although the breadth of ad formats available through programmatic trading is said to be improving. With more mobile, video and audio formats coming online, the report states.

In such a case, Brands and Agencies (like jmexclusives) need to do more to push publishers to improve the quality of their inventory. But, this has to be at a minimum, safe and viewable capacities. And that’s where, apart from Google AdSense, advertising platforms such as AdDollars come to play.

AdDollars is an advertising application that allows you to earn money from your website or your blog. By adding in-text advertising to the content published on your website.

Say, for instance, phones, speakers, TVs, headsets, home appliances and other devices (even increasingly connected cars). If, indeed, there is a future beyond “the end of advertising,” we can be certain that the business will not look quite the same that it does today.

Activating the application takes from 48 to 72 hours. During this period, the website and its content are reviewed, and you are notified via email if approved. But, if you have received the approval message but the application is still deactivated, please contact Hosting Department.

For your information, you won’t need to make any programming changes to your website. Since the process of adding advertising will be automatic.

Just follow these simple steps provided below to launch the application: 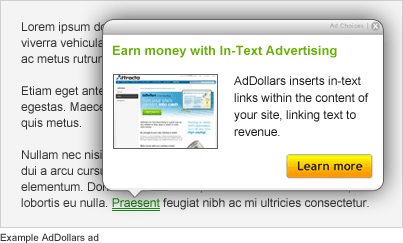 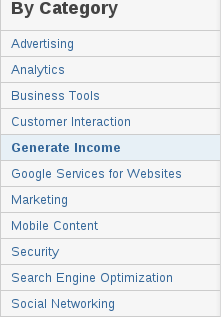 And then again, choose the (AdDollars) application. 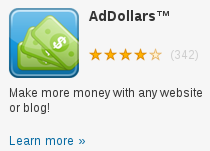 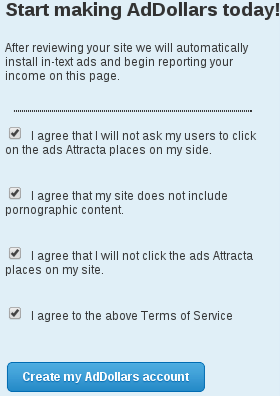 A message will show up that the application has been installed successfully.

– After 72 hours, you will receive a message via your email to completely activate the application and launch it on your website if it’s complying with launch conditions.

How do you View credit and clicking statistics?

Of course, through the AdDollars page, you will see a statistic of the clicks number and the total profit you have achieved.

Once the credit becomes 50$, a new option will show up on the same page, enabling you to request sending the money to the address you will enter in your payment data.

Despite the accelerating pace of change, the continuing successes of Google’s and Facebook’s advertising businesses have prompted some questions. Like whether the advertising space is still competitive.  Critics of this so-called “duopoly” argue that the two Silicon Valley Companies are the only viable participants.

How is AdDollars spending done?

Consider today’s reality: advertisers compete to reach the same consumers across multiple mediums.  Services that deliver ads digitally to an individual’s mobile device don’t just compete against one another.

Inter-media competition was particularly evident in the 2018 “shakeup” announcement by Adobe and Mediaocean. That the two would partner to join digital ad buying. With television, and “converge and automate television and video advertising.”

Ad dollars: How much are marketers putting aside for programmatic in 2019?

This competition is fierce, as advertisers continually shift budgets among platforms to maximize the return on their ad spend.  What was once a quarterly or monthly re-evaluation of advertising programs has become a weekly event. And even a daily recalibration of how and where advertisers are reaching their audiences.

Economic research confirms that online and offline advertisements substitute for one another.  This is consistent with what one would expect to find. As an example, internet radio does compete with traditional broadcast radio — aggressively so.

By using data from the Internet Advertising Bureau [1], [2], the Association of National Advertisers, and market research and intelligence provider MAGNA Global, the graphic below illustrates where digital advertising fits.

Particularly, into the broader advertising space with the four other major advertising vehicles (radio, outdoor/billboards, print, and television).

And in that case, it represents how this categorization breaks down even further in the digital ad-supported ecosystem. Using a hypothetical company spending a $100 budget in a fashion representative of the overall ad space.

The graphic contextualizes a typical expenditure to illustrate how many ads spend goes where rounded off to the nearest dollar.  Naturally, different advertisers will pursue different strategies. Whereby, a given advertiser might spend its entire budget on the radio.

As the graphic shows, however, an average advertiser spending a $100 budget in a representative way would spend $6 on the radio.

Even after considerable growth in the online ad space, a significant number of ad dollars continue to be spent offline.  Indeed, notwithstanding DisCo’s long-standing pessimism about the economic prospects of linear video programming. As well as, television advertising continues to consume a substantial share of dollars in the global advertising space: roughly 35%.

The continued emphasis on television likely reflects the fact that many advertisers still prioritize reach over accuracy. While investing in television advertising accordingly.  Digital Marketing has recently edged out television. With an average of $41 out of every $100 dollar in ad spending going toward digital.

Of these $41 “digital” dollars, more than a quarter make their way to agencies and third-party providers, who offer services relating to targeting, verification, and execution.  This leaves $30 of the ad budget for ad exchanges and platforms. Including digital properties, ad networks, and assorted related service providers.

NB: The graphic doesn’t include expenditures related to the so-called “counterfeit inventory.” Therefore, for more on industry’s growing efforts to fight this concern, read about IAB TechLab’s ads.txt standard.

Finally, I hope you enjoyed reading the above-revised guide. You can also read and learn more about How Ad Dollars Are Spent. But, if you’ll have additional references, please Contact Us for more additions to the topic.

If you loved this or more of our blog topics, please feel free to share your opinions in the comment sections. Below are more useful and related topic links;

Our Most Popular Blog Posts

How a CRM Software System works | Wonder what’s Next?

Could You Please Help Us Out?

As a free for use weblog, we’re using the power of our web platform (jmexclusives) to aid in the mass shortage of resourceful & critical online web content. That said, you can Donate to Support our workforce.

Thanks for visiting & welcome back!